Why should you consider transferring your AAV production from adherent to suspension?

Adeno-Associated Viral vectors (AAV) are among the most widely used vectors for gene therapy applications. While cultivation systems such as roller bottles, CellSTACKs (Corning), CellFactories (Nunc, ThermoFisher Scientific), fixed bed reactors or microcarrier-based cell culture are extensively used in large-scale adherent production of viral vectors such as AAV, there are many reasons to adapt your process to suspension:

Transferring your cells from adherent to suspension culture is the first step in your journey towards a scalable production process for AAV (see our Tech Note on Suspension Adaptation for tips). You should use a culture medium during adaptation that supports transient transfection to eliminate the need for medium exchange later in the process (click here for Xell’s choices).

While you will probably start optimization of transfection and production in suspension in small-scale cultivations, e.g., Erlenmeyer shake flasks, your final process will be in a large-scale controlled cultivation system. The move from shake flask to controlled bioreactor is not as hard as you may think. Factors such as pH profile can be optimized later on. For our case studies, we show data on production of AAV-2 and AAV-8 with our easy protocol, which was applied in an initial scale-up step from shake flasks to 2 L benchtop bioreactors.


Our easy protocol for seed train and production

In this approach (Figure 1), we thaw HEK 293 cells and culture and expand them for at least three passages. Small-scale processes are performed in 30 mL volume in 125 mL plain Erlenmeyer shake flasks. The initial scale-up step is done in 2 L stirred tank benchtop bioreactors as a good scale-down model for larger controlled systems.

Xell’s HEK ViP NX Medium, which is serum-free, chemically defined and optimized for transfection and virus production, is used at all the steps. We don’t add any growth factors but keep in mind that some HEK cell lines require supplementation and we can increase titers by adding e.g., Insulin or IGF.

We inoculated the production process at a cell density between 1.5-2 million cells/mL at half (or more) of the final cultivation volume. After one day to let the cells equilibrate in the system, we add fresh medium at half (or less) of the final volume, and the pre-complexed transfection mix. Our transfection mix was PEI-MAX (Polysciences) with a 2-plasmid system for AAV-2 and AAV-8 (PlasmidFactory) using low total DNA amounts of 1 µg/mL culture at a 4:1 ratio in fresh medium (5-10% of total volume or mix directly in the complete volume of fresh medium added). Addition of medium and transfection mix should set viable cell density to 1.5-2.5 million cells/mL.

Samples were taken daily from the production processes to analyze viable cell density, viability, transfection efficiency and AAV titers. Final harvest was done at 96 h (AAV-2) and 120 h (AAV-8) post transfection. See our tip box for factors to consider and optimize during the procedure.

Tip Box: What to consider and optimize:

Processes for AAV-8 production were inoculated from a common pre-culture at around 1.5 million cells/mL and after one day diluted via fresh medium addition to around 2 million cells/mL for transfection.

Figure 2: Cell density and viability in shake flask and bioreactor processes from inoculation (day 0) to transfection (day 1) and harvest (day 4). The green arrow indicates the time of transfection.

Genomic AAV-8 titers (Figure 3) were determined via qPCR from culture supernatants (no cell lysis) after DNAse I and Proteinase K digest. 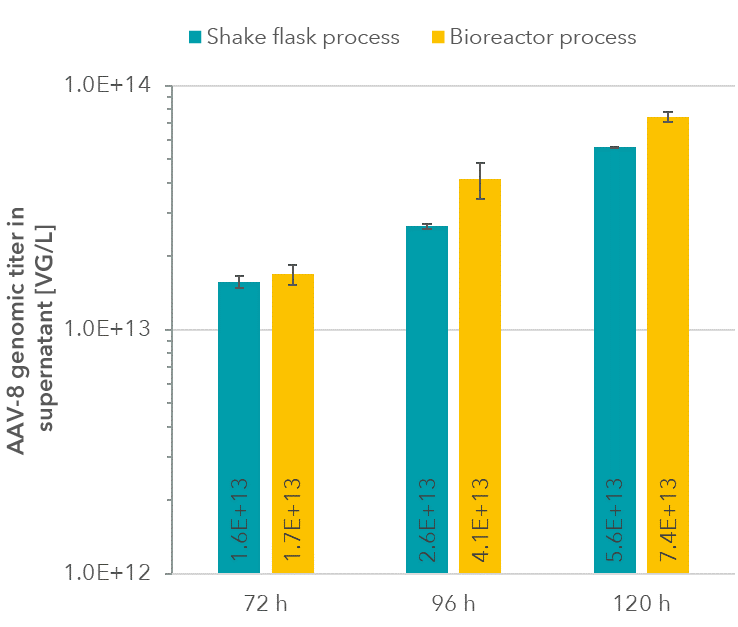 Interestingly, though cell density was lower in the bioreactor, genomic titers proved to be higher compared to the shake flask process.

Figure 4: Cell density and viability in shake flask and bioreactor processes from inoculation (day 0) to transfection (day 1) and harvest (day 5). The green arrow indicates the time of transfection.

Genomic AAV-2 titers (Figure 5) were determined via qPCR after DNAse I and Proteinase K digest. In contrast to other serotypes such as AAV-8, AAV-2 is highly retained within the cells (cf. Vandenberghe, Luk H et al. Human gene therapy vol. 21,10, 2010). Therefore, titers were measured in supernatants and also in lysed cells from cell pellets.

Genomic titer in cell pellets decreased with prolonged cultivation while titer in supernatant increased. Similar to our results with AAV-8, titers for AAV-2 were also higher in the bioreactor process compared to the shake flask process for all samples. 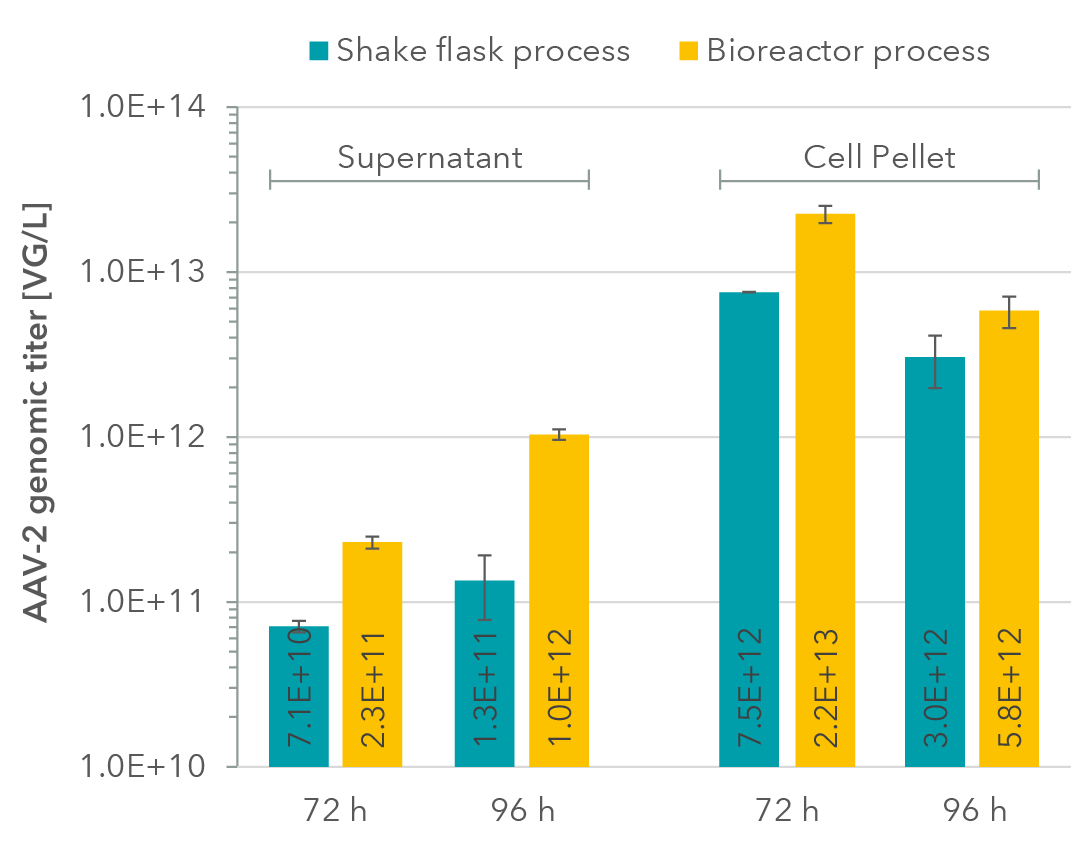 For both case studies, processes were successfully transferred in an initial step from uncontrolled shake flask process to a bioreactor process with even higher titers in the controlled system. Future optimization will now focus on pH profiles and inoculation cell density for further increasing titers.


As part of the analytical services at Xell, we also provide a qPCR-based analysis to detect target DNA/RNA sequences from various sources. Reach out to discuss your qPCR needs. If you found this tech note informative, sign up for our newsletter to be notified when we post the second part to the tech note.


Stay tuned for Part 2 of “The journey to AAV production in suspension: Concentrate and purify your AAV” – Coming soon!