Cell culture medium optimization is commonly carried out with the production of liquid prototypes in small scale to test concentration ranges, individual components, nutrient balances, etc. Raw materials are individually weighed out and dissolved in water sequentially or batch wise. When up-scale of medium production is considered, it is beneficial to produce the medium/feed as dry powder formulations from a certain size onwards due to storage and transport capacities, batch homogeneities, cost, as well as shelf-life assessment.

Storage and transport capacities play a major role and can significantly impact costs of cell culture media and feeds. The dry formulation required to make 1 L of medium/feed would have a shipment weight of about 200 g and volume of ~ 10 mL while the same medium/feed as a liquid formulation would be around 1 L or 1 kg.

From a production standpoint it is often advantageous to have larger quantities from a single production batch, as this affects the cost margins and reduces risk with regards to supply chain. A larger lot size ensures that customers have the option of purchasing more media/feed formulations from the same batch. With regards to the production process, critical impact factors for potential lot-to-lot variations can also be reduced (see our Tech Note on Trace Element Impurities).

Shelf life of cell culture media is another important factor to consider while comparing liquid and powder media formulations due to the differences in the primary packing used and the storage as a less reactive mixture of solids. In aqueous formulations salts are present as ions and more prone to chemical reactions and degradation processes. It should be noted that media instabilities can arise due to solubility limits of some raw materials, which can also precipitate again over a certain period of time. As liquid formulations are normally filled in transparent PET bottles, attention must be paid to the influence of light during storage, as some components can have a higher sensitivity, known for example for some vitamins (see our Poster on Analyzing Stressed Media). In contrast, powder formulations of cell culture media are filled in opaque containers as standard and reduce this risk for the customer.

In some cases, it is advantageous to make production and specification-related changes to the raw material formulations when transferring them to powder production. Experience has shown that when optimizing media formulation, many points are not considered that will later be necessary for the transfer into a functional powder formulation, which also has to comply with all additional powder-specific specifications. Typical examples are the pre-dissolving of poorly soluble raw materials in acids and bases during liquid production, that can have an impact on final pH and osmolality values and the use of sticky or liquid raw materials that are difficult to distribute in a powder formulation. For powder production of media, the scope of specifications expands, as in addition to liquid formulation specifications, data related to powder quality (e.g., moisture, particle size, bioburden, homogeneity, etc.) should also be complied with, whereby the raw material composition can have a significant influence and must be assessed by experienced technical personnel.

In addition to the final powder formulation, a robust solubilization protocol must be established that can also be easily implemented by the customer. At this point, there may also be deviations in the comparison to the specification values of the liquid formulation. For example, there can be deviations in final osmolarities while implementing pH changes to achieve raw material solubilization. When changing to powder media, disadvantages must also be taken into account, such as the extra time customers have to spend liquefying and filtering the medium, which is associated with a certain probability of error.

Finally, the most important control for a successful transfer is the biological control on the client’s specific cell system. Here, a transfer of a liquid formulation into powder production for a standard HEK cell line is shown as an example in Figure 1 and Figure 2. 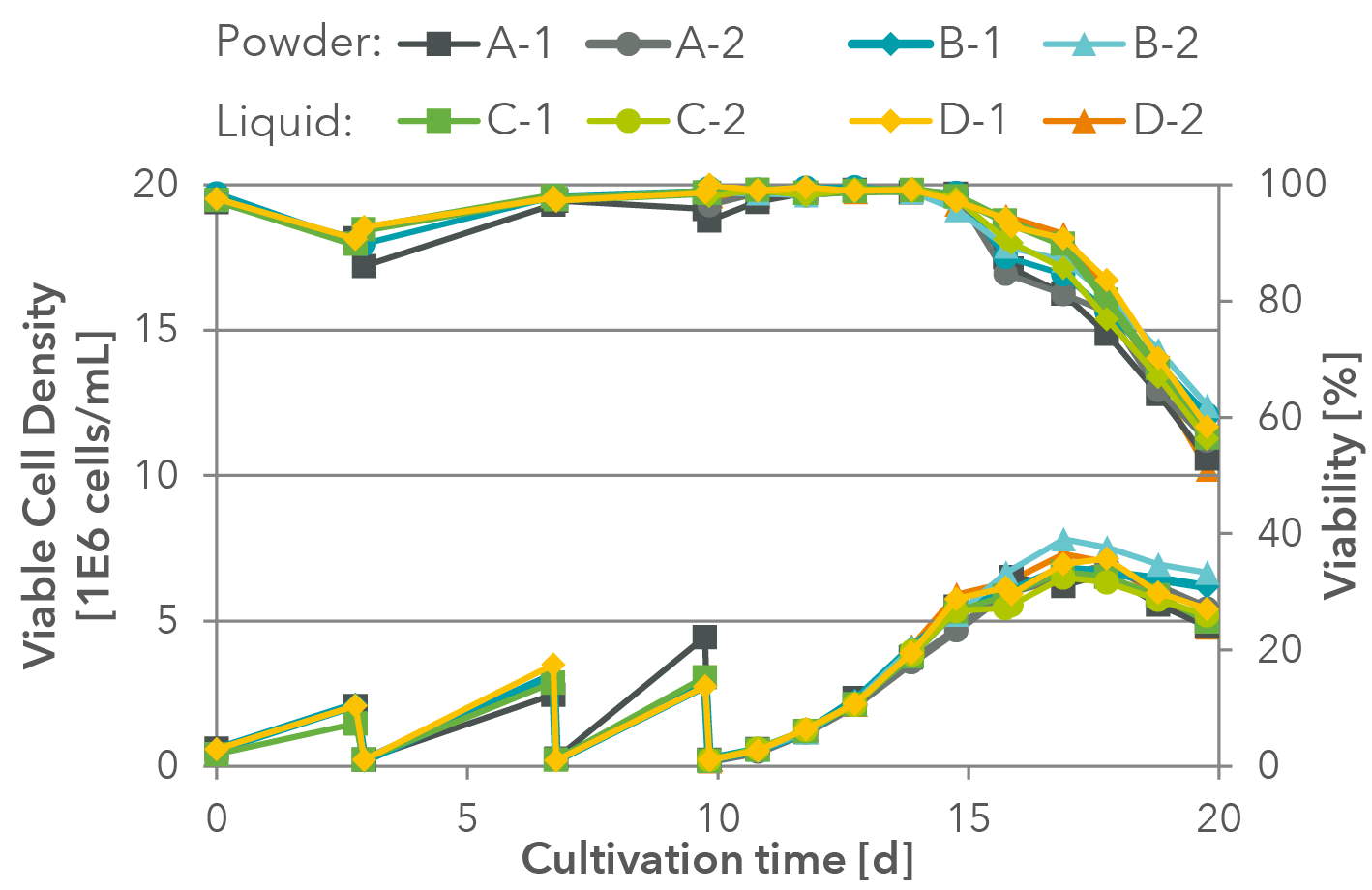 Figure 1: Example of a successful growth test for the transfer of the liquid medium formulation into powder production. Two powder batches (A, B) as well as two liquid batches were tested in duplicates (C, D). For the data, standard HEK cells (Expi293) were thawed directly in the respective batch and passaged 3 times before a growth curve was measured over 10 days in duplicates. 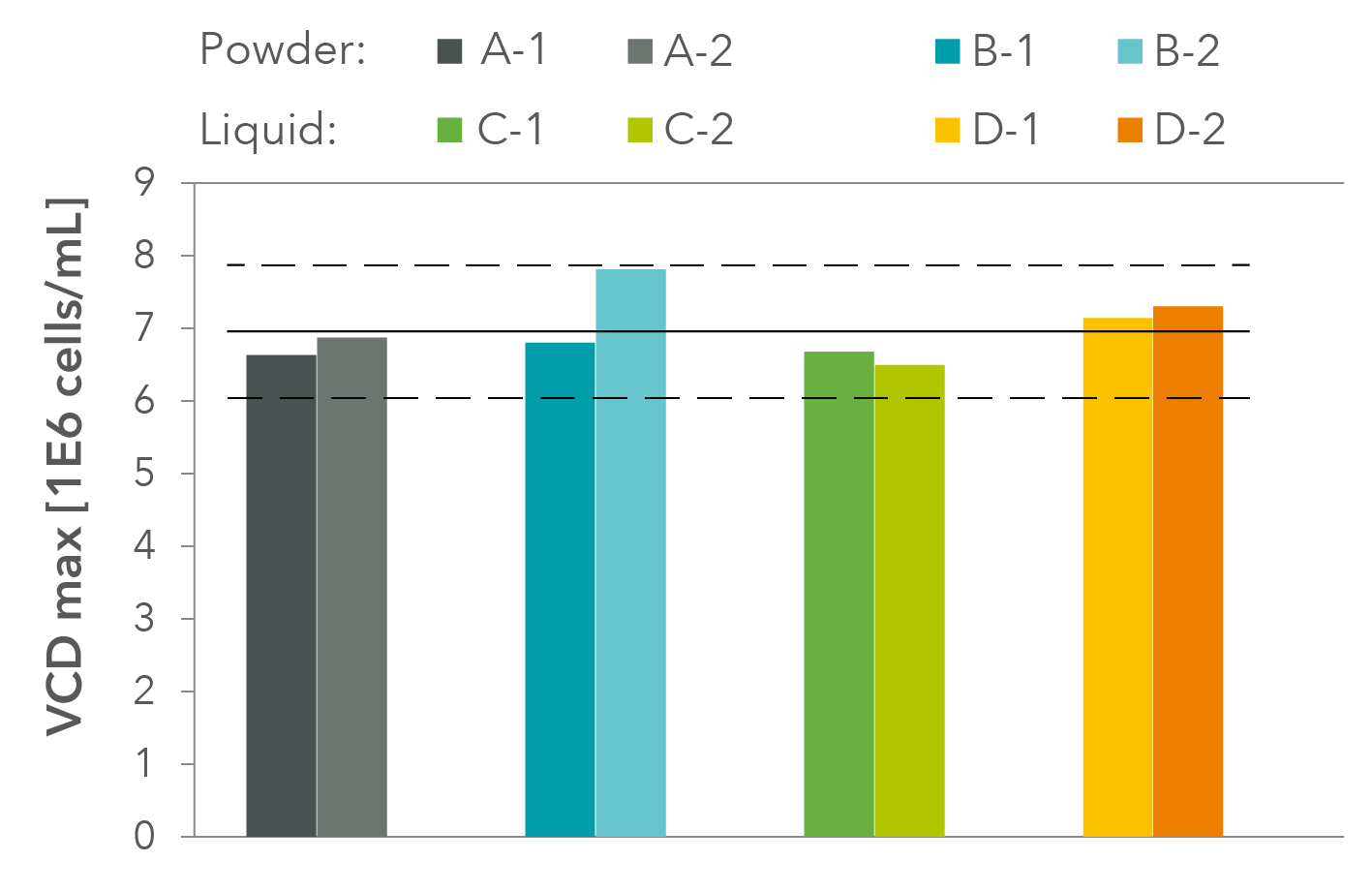